The “Android vs. iOS” debate is one of those that will never die down as long as the two operating systems are alive and relevant on the market. It’s the same story as with many other popular products and brand names, and some users will always favor one choice over the other. 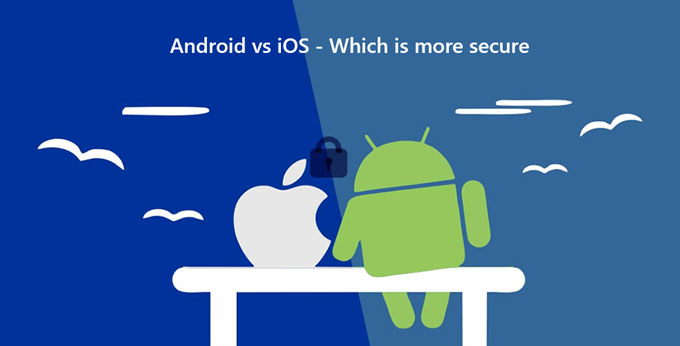 And this is not necessarily a bad thing – quite the opposite, in fact. It drives competition and promotes innovation. But while choosing between the two operating systems comes down to personal choice, in most cases, there are some grounds for objective comparison which should be thought about more carefully. Security is one of those areas. Considering how much data we trust our mobile devices with these days, it makes sense to take a careful look at how the two operating systems measure up.

Both operating systems are quite secure in general terms, although they have different fundamental philosophies in this regard. Android tends to be a bit more open, giving more freedom to users who know what they’re doing (or claim to, anyway), but as a result, it can allow device owners to shoot themselves in the foot. This is a rarer occurrence with iOS, but it’s still possible to circumvent the operating system’s security restrictions, for example, by jailbreaking one’s device.

Antivirus solutions are available on both sides of the fence, as are other tools, like VPN services. Android seems to be a very active field for Virtual Private Network users, and the operating system enjoys a large market share in this field. It’s not clear why there’s a noticeable preference towards Android on the VPN market, but it’s a point worth keeping in mind when one first sets up the security of their device.

iOS has a reputation for being more restrictive with regards to what users can install and run on their devices, but there’s a good reason for that – it’s a system that works. While one can install unofficial apps on their Android devices and even allow those apps to alter the configuration of the operating system on a deep level, this can lead to security issues. It’s a risk that can’t be ignored, and only those who truly understand how the operating system works and what’s safe for it should be allowed to touch these settings in the first place.

Likewise, the official app store is more heavily curated on iOS, leading to a smaller selection of apps that tend to work better in most cases. Of course, this is still no guarantee that you’ll be protected, but it goes a long way towards maximizing the security potential of the OS.

The situation on Android can be a bit confusing at times due to the way the operating system is distributed. Third-party developers can release their own Android phones with customized operating system editions that feature their own apps, and it’s not Google’s responsibility to maintain those. Some manufacturers – like Samsung – have occasionally proven to be a bit slow in keeping their devices up to date, and users should do their own research on that front before investing in a device.

The operating systems themselves regularly get new features as well. While it’s up to the user to make sure those updates get installed – something many people fail to do until it’s too late – at least the blame falls on the person using the device in that instance. The developers of both operating systems have proven that they know how to handle the security of their devices, and what kinds of features they need to focus on with each new update.

In the end, though, no matter how much we compare the different security features of both operating systems, one can always find shortcomings on both sides, depending on how they look at the situation. It’s important to realize that the weakest link in the security chain most often happens to be the end user, no matter what operating system one considers. Pay attention to the notifications you get from your OS, don’t skip regular updates, and you should be able to avoid most types of problems.