A Peek Into Potential New Home Automation Features For Android

Home automation is something which has been growing in leaps and bounds over the past years, especially given the increasing reliance on mobile technology which people are now showing.

The newest developments in technology and future developments are looking at a more integrated household system which would allow for a greater degree of control over those systems on the part of the homeowner. As the pace of modern life increases, home automation is becoming focused on making home life more luxurious, easy, and relaxing in as many ways as it can, from creating thermostats which can be controlled from a mobile phone, to table lift which can readjust a TV without the owner needing to lift more than a finger. This embedded technology, as it is becoming known, has been appearing in smaller aspects of the home over the past few years, but the Internet of Things ideology which is beginning to permeate the ideas of automation.

With technology shifting to incorporate more and more automation on a daily basis, it makes sense that home automation and health technology would be next in line for the technological update. Many different companies are looking at ways to specifically help in those areas by coming up with technology which both frees more time for other work and relaxation, but also helps to aid in continual good health and wellness over the course of a lifetime. All the major tech companies have their own particular niches, as can be seen when discussing the forms of home automation that are coming into being, and Android itself is no different.

The basic functions of home automation is to allow for greater remote access and control of the home and the electronic systems in it on the part of the homeowner. All of the companies involved in this effort have many goals in mind, goals which are not limited to the immediate ones of easier control via technology. Some goals include: 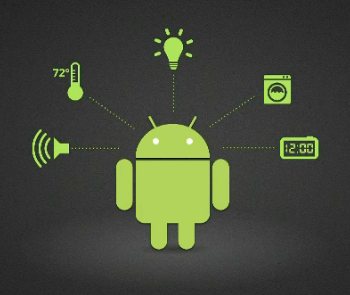 Using Android to link up your home automation systems can be useful in terms of the greater degree of control you can have over your automated systems. Security and heating systems do normally synch up to a mobile device to allow for them to be controlled by an outside, but the Android project is something which perhaps could access them in a similar format but with less of a lapse in time between closing one link and accessing another. The one problem which faces designing an app which can allow for access of all automated systems is that sometimes these systems are incompatible, meaning that they need to be re-designed in order to fit comfortably with one another and work in the same environment.

Typical home automation can take the form of heating, lights, music, hot water, security, tables, chairs, TVs, computers, windows, and doors. It is perhaps understandable that an app which allows for centralised control of every single automated device would be difficult to create. An Android app could perhaps approach the problem from the opposite side, by creating something which could take all the differently coded apps for controlling home automation and itself being the app which allows them all to work well together. Remember that the centralised app doesn’t just have to communicate with the device in question, but also with the nodes which then connect them to the internet.

The power supply for each appliance is wired through an electromechanical relay. A number of relays are used depending on the number of appliances to be controlled.

Normally, there is a specific piece of equipment used to connect the server and the mobile device – this can be either a separate dongle of some kind or a run-of-the-mill access point, but it must provide a good base for the communication between the mobile device and the systems it is trying to control. Any Android app should be capable of sending messages between itself and the devices it has attachments to, so that the lights in a room can perhaps come on in response to the presence or absence of humans. The main problem of such a process is the number of relays which can be involved – these relays are a complicated process, and synching them all up to properly relate to an app can be a long process. This can of course be mitigated by choosing the right micro-controller for all the relays, so that the micro-controller can talk to the mobile device, and control the relays properly.

Where home automation and mobile devices can come in particularly handy is in the use of table lifts. Tables are converted into moving lifts by means of linear actuators, and these can be used for a variety of purposes. Just as moving chairs can be set at different heights for the comfort of different people, so to can tables be moved to different heights to suit different people. Tables can also serve a number of functions when they have table lifts involved – they can have TV sets on them, they can be used as storage space, or they can be used as coffee tables at some points of the day, and dinner tables at others.

There is no question that home automation, and the Android app discussed in this article, would help a lot of people. Home automation – being able to control certain aspects of home and home security through one single device is something which can intensely liberating for many people, as well as helpful in taking stress out of their day in terms of not needing to take care of so many small details.

The app itself is something which is complicated to make, but would eventually be even more helpful than the home automation itself in helping people to exert greater control over their home life.