Android Desktop Manager to Backup and Organize Phone over WiFi

If you have hundreds of apps and gigabytes of multimedia content on phone, it’s not easy to manage and organize everything swiping thumbs on small touch screen. Desktop program with full control over phone’s content could come as handy solution.

Why Should I Use?

These applications let you carry out operations more than just a copy-paste of files. You can:

You have to install the software on Computer and similarly their app from Play store on Android device. They get configured and connected automatically on startup and you get to access mobile device content on PC.

I tested some popular Android Desktop Managers and sharing the best ones with you.

[sws_green_box box_size=”609″]The reason I have chosen Wondershare MobileGo over others is its features, ease of usability and bug-free awesome interface. [/sws_green_box]

Following are its features:

1. Over the Air – It was very easy to configure and get connected my phone to computer via WiFi. After installing MobileGo app on phone, it automatically detected computer present in WiFi network. Just tap on the name, connection is successful.

2. Android Backup – Create complete copy of content on Android device so that you can always restore back in case of crash. Also, it can be helpful when you want to free up space on SD card by moving old camera photos to safe place. 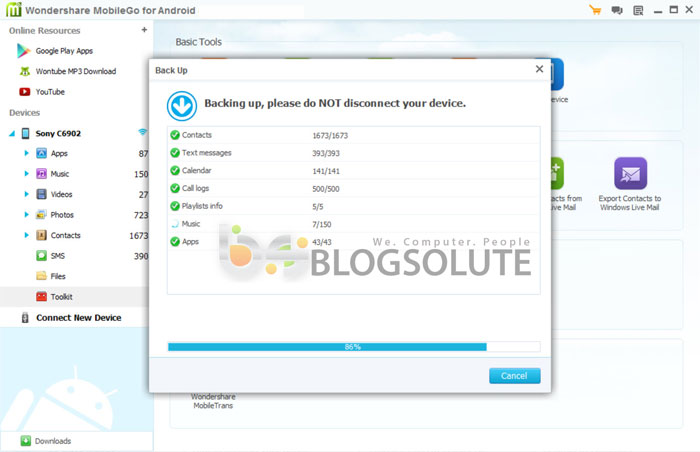 3. App Management – Install and Uninstall app from Computer itself.

4. Move Apps to SD Card – If phone memory is full, apps can be moved to SD card. (Didn’t work in my test, maybe Root is required. I am unsure.)

6. In-built Media Converter – I tried to copy FLV file which may not be supported for playback on most devices. In such case, not just copying but MobileGo offers functionality to convert it before pasting to Android-optimized video format.

Other similar software programs are available but they are far away from being perfect. Following are their limitations:

MobileGo is no doubt perfect Android Desktop Manager for Windows (and Mac too). It has features like Over-the-Air sync and Media conversion which isn’t found in other programs. Coming from the reputed developer ‘Wondershare’, you can always count on them for regular updates and support.

You can download fully functional 15 days trial and get to know how comfortable and easy it is.

P.S. Though, there are other programs available which claims to be completely free but none of them offer the level of comfortableness like MobileGo. In my tests, it was clearly seen that MobileGo doesn’t install any crapware on any device and does perfectly what it says.

*Features only work on Wondershare MobileGo.

Well, thanks for sharing such a nice info…..