Words are often invented. Yes, a general usage of certain word could become so popular in a community especially on internet that it is often accepted by Dictionaries. Latest example could be Selfie and twerk which were approved and included in Oxford database.

When you are new in some community and completely clueless about an acronym or word used often in conversation. In such case, even Google cannot answer correctly. This happens because it is a slang used and invented by community which isn’t actually a word. In case, even if it is a word, the meaning wold be totally different.

Let me Give an Example

I registered on a Jokes application and many of the user submitted jokes had this word- YOLO.

As mentioned in our article about using Google search as Ninja, I tried to find but result referred to as some Yogurt business. I was sure that meaning is nowhere near to Yogurt. 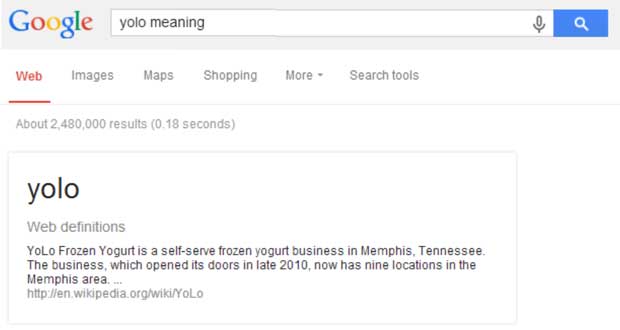 How to guess then? I came across this awesome site called AcronymsAndSlang.com which tells you the meaning of such words.

They have a huge database of around 3.5 Million acronyms and slang words. Just type the word and hit search to know its meaning. 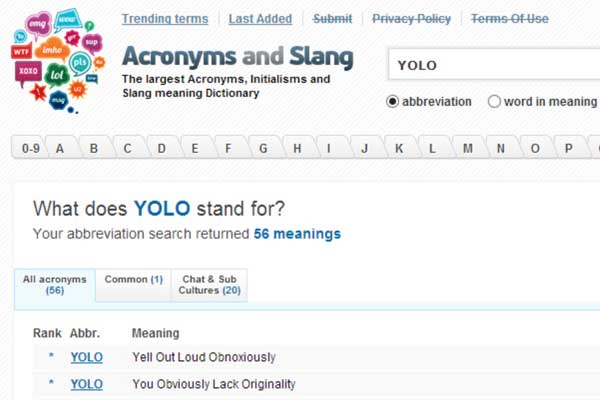 It is not restricted to abusive, offensive or bad words only. I often get stuck on technical forum conversations where they begin sentence with IMHO or AFAIK or refer someone as noob.

Results are classified according to its place of usage. Like Technology, Chatrooms, Business, etc. This makes it easy to draw reference and understand quickly.

You can not just use it for searching meaning for the word but you can discover some new words. They may not be used often in your circle or network but you can be initiator and to get a cool quotient in community.

While people are continuously inventing their own terms day by day, AcronymsAndSlang.com can come handy to reveal real meaning. But I expect some improvements on their search results. Though, they have categorized results to make easier, sometimes usage in sentence becomes necessary for complete understanding.

Also, they can add one more tab called ‘Popular usage’. For example- YOLO may have hundred meanings but most popular usage is for ‘You Only Live Once’. This can become possible with the help of user community.

This will come in handy. Thanks for the find Rohit