The budget Android tablet market has changed a lot since the last year, when every Indian manufacturer was jumping on this booming business. Nearly every single budget tablet launched in that time period boasted impeccable hardware specifications, though their actual performance was terrible.

Flash forward to 2013 and we can definitely see this trends improving significantly. Due to the recent efforts by companies like MediaTek, who’re leading the way for development of faster and cheaper chips, it has now become possible for companies to manufacture tablets with better hardware while keeping the cost low at the same time.

One such example is Xtron+ — the latest Wi-Fi only budget tablet from Lava that promises impressive performance at a low price of only Rs. 7,000. Here’s our review. 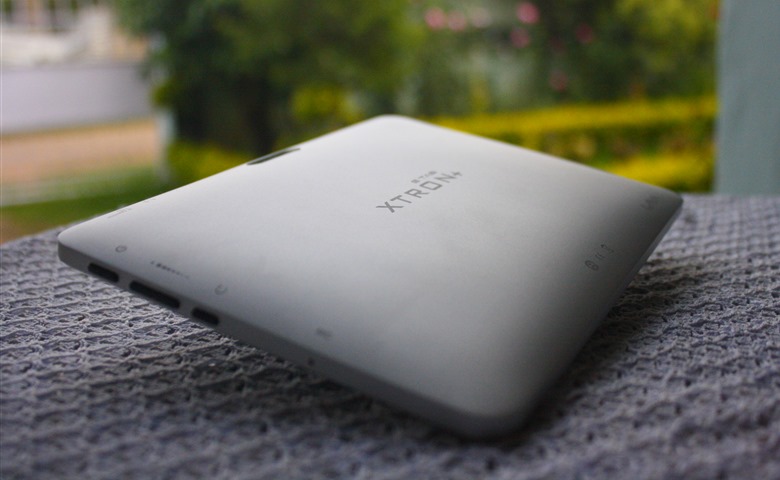 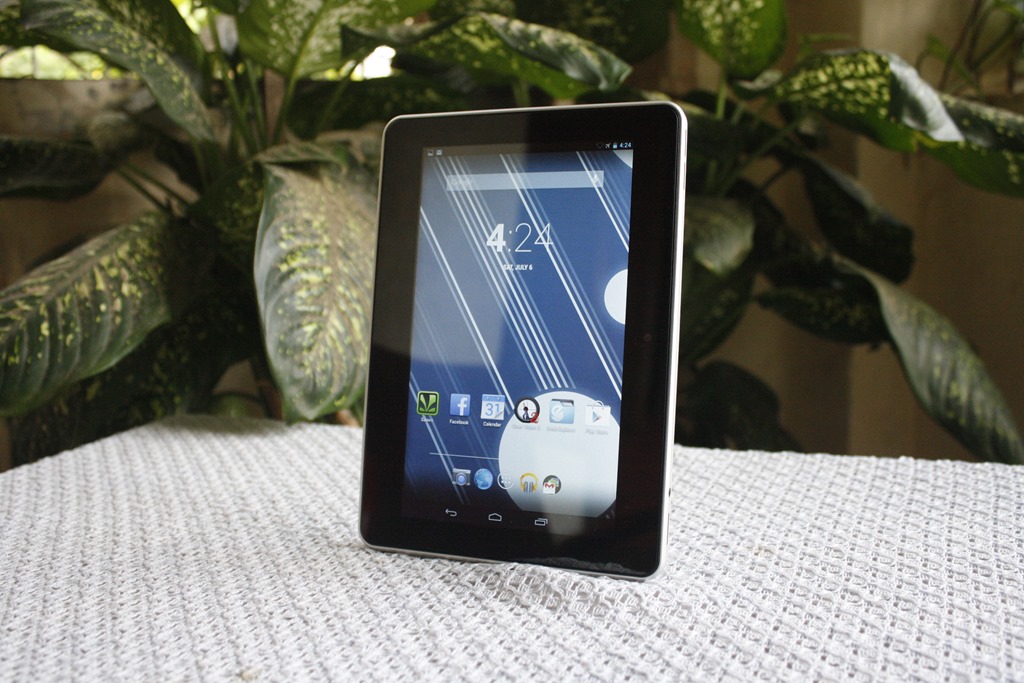 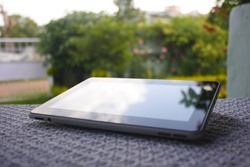 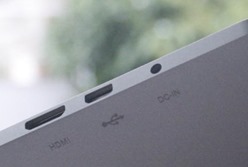 When held by the back, the Lava Xtron+ can impress anybody with its sleek silver faux-aluminum plate and the model name printed on it. But when turned over, the Lava Xtron+ looks like any other budget 7-inch tablet with a bland front and a large bezel. While I do acknowledge that the Xtron+ is a budget tablet, but Lava could have at least tried a little to differentiate it from the Chinese crowd.

The ports and buttons are located at their usual positions including an HDMI port and a hot-swappable SD-card slot at the top. The speaker grilles are also, thankfully, located at the top and not at the back. Interestingly, the tablet also has a separate physical back button at the right edge. This is ridiculous, Lava!

It even uses an outdated DC-IN charging port, similar to what a generation old Nokia phones used to have. USB charging is also unsupported, which is a huge drawback. 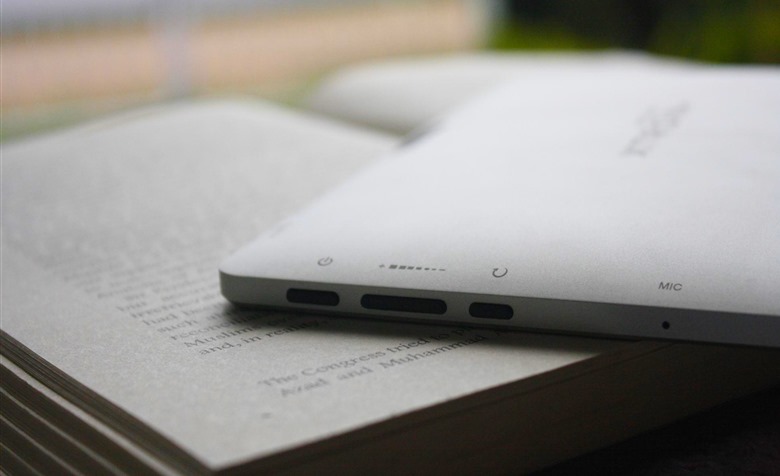 Talking about the Lava Xtron+’s hardware, the tablet boasts a dual core Cortex A9 CPU with each core clocked at 1.5Ghz and a Mali 400 GPU. I was unable to find any further information about the CPU except for its architecture, but my best guess is that it’s a MediaTek produced one. The A9 CPU architecture definitely places the tablet a step ahead of the competition, where almost every tablet in the Rs. 5,000-10,000 range has an inferior Cortex A7 CPU.

Other than that, the tablet has 1GB of RAM, which should be enough for a decent multitasking experience for all users.

Praises aside, GPS and Bluetooth are sadly omitted from the Xtron+, probably for keeping its price low. Since the tablet does not support mobile networks, relying on mobile network towers for pinpointing of location is also striked out, making GPS navigation completely impossible on this tablet unless you’re connected to Wi-Fi.

The omission of Bluetooth means that tethering, pairing and file transfers over Bluetooth isn’t supported as well.

On specifications sheet, the tablet claims to have an internal storage of 8GB. However, there’s a small caveat.

Instead of using a single 8GB flash internal storage, the Xtron+ actually uses a combination of 500 MB internal flash storage and a built-in SD card of 5.84 GB (excluding the space used for system files). The outcome is that the user is left with very less space for storing apps since they’re by default installed in the internal storage.

In practical, most apps can be moved to the SD card, but those having widgets (Facebook , Twitter, YouTube, etc.) as well as system apps (Hangouts, Calendar, etc.) are immovable. This can be a big problem once you start accumulating such non-supported apps.

Built-in SD storage are also not known to have good transfer speeds as compared to internal flash storage. Though the Xtron+ managed to achieve a write speed of 6.22 MB/s and 11.19 MB/s read speed, which should be fairly enough for normal data transfers. 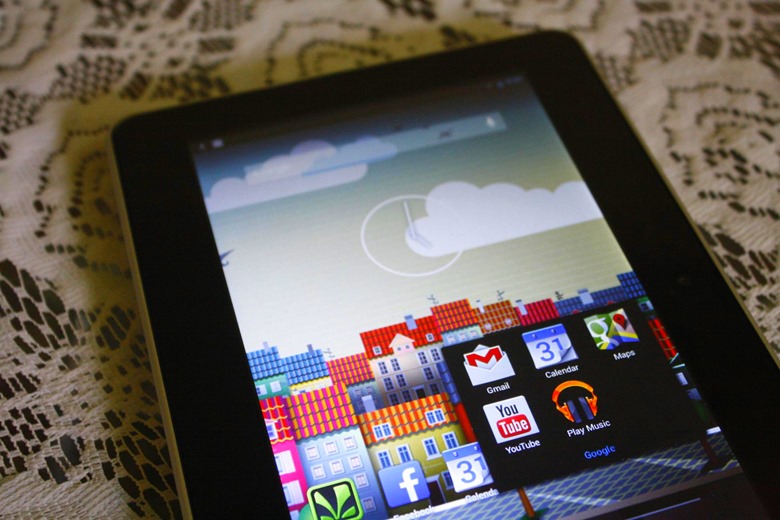 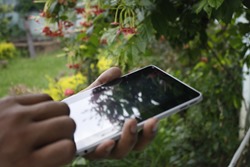 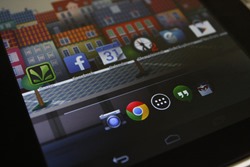 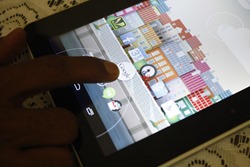 The front of the Lava Xtron+ holds a 7-inch sharp IPS LCD display having a resolution of 1024 x 600. It’s a bright screen and with a pixel density of 170 PPI, it is pretty sharp too. The best part about the display is that, despite being an LCD screen, it’s not a battery consuming monster. I always found its battery usage to be lower than processes. The screen is prone to scratches though and is highly reflective.

This resolution, however, doesn’t seem to fit very with Android. I noticed a few visual artifacts in various places such as the recent apps screen and the launcher. Unfortunately, Lava probably decided to ignore them without any corrections.

While everything looked good about this tablet until now, the software is a disaster. The Lava Xtron+’s firmware has been poorly setup for a tablet. It seems as if Lava has accidentally used a phone specific firmware for the Xtron+ rather than a tablet specific one, since several key tablet features of Android are missing. 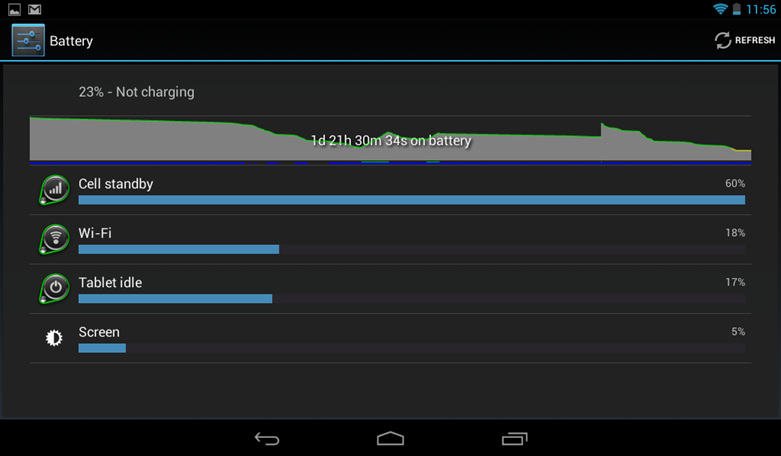 After spending a few hours with the Lava Xtron+, I noticed that the battery was diving downwards at a ridiculous rate. This kind of usage was very strange, so I opened the battery stats page only to find that Cell standby had consumed nearly 60% of the battery.

Cell standby is the battery used by radio cells for mobile networks. This tablet DOES NOT have any radio cells! The engineers working on this tablet didn’t even bother to setup the firmware properly and instead chose to simply download Android, flash it in the tablet and put it up on sale. 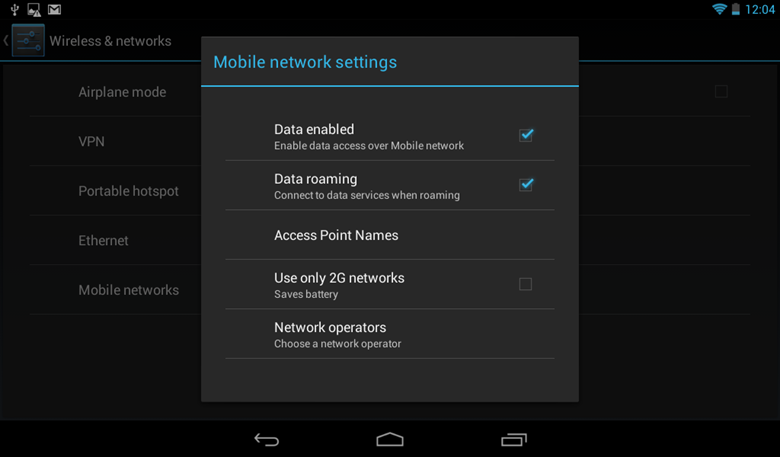 A further visit to the settings page revealed that the Mobile networks page is still present there — in a tablet that doesn’t support mobile networks. Classy, Lava.

Multiple User Accounts is Missing Too

Multiple user accounts, which was one of the key tablet features introduced in Android 4.2, is missing from Xtron+ as well. This further confirmed my suspicion that Lava might have accidentally used a phone specific ROM of Android.

Launcher has not Been Setup Properly

The 1024 x 600 pixels resolution doesn’t seem to fit properly with the Android launcher and results in un-even grid sizing and spacing issues. On home-screens, the last row of icons overlaps with the dock separator. A majority of the users are not going to notice this until they put their hands on some other Android device.

Next is the virtual buttons. If you observe carefully, they’re not symmetrically placed at the center. As a graphics designer, this irked me a lot.

The tablet tends to lose Wi-Fi connectivity a few minutes after it goes to sleep. I’ve no idea whether Lava did this on purpose for saving battery or not, but it’s definitely not a good thing since the user will be missing out of all sync notifications during that time period.

Thankfully, the Android experience is nearly uncluttered by any OEM-installed cruft, other than a few pre-installed apps, which included Saavn (an excellent free music streaming service), an anti-virus app and a terrible file explorer. I obviously uninstalled the latter two soon after setting up the tablet and others are recommended to do the same too.

A budget tablet maker Lava cannot afford to create a custom skin for its Android devices like Samsung (TouchWiz) or HTC (Sense) do and that’s a good thing since I’ve always preferred the vanilla Android experience over custom skins.

None of that excuses the poor software of Xtron+ though and it leaves much to be desired. The fact that all the issues can easily be solved by a firmware update, could still make it a great tablet nevertheless. But going by the release-and-dump trend among Indian manufacturers, I highly doubt if it is ever going to happen. I hope you prove me wrong, Lava.

Apart from a handful few, most of the apps loaded quickly and doing casual gaming on the the Xtron+ was a cinch too. But do not expect it to run this boy to run graphics intensive games (for example, all Gameloft games) without significant lags.

Chrome, as usual, runs terribly on Xtron+, but it’s Google at the fault here since it refuses to run smoothly when feeding it anything less than quad cores. I’d recommend users to use the much faster, good old Browser. 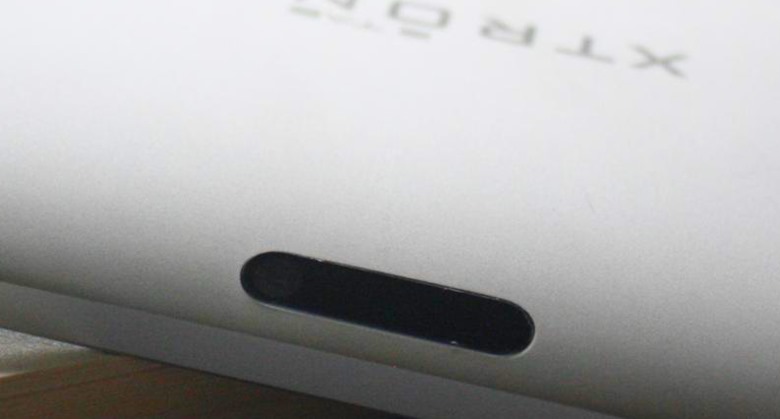 Another section, another huge mistake. Budget tablet manufacturers, including Lava, don’t seem to understand that tablets are not camera devices. They are largely used for making video calls rather than taking photos with two hands.  The Xtron+ comes with a 2MP rear camera, but only a meager 0.3MP camera is fitted at the front, which although shoots some good photos, demands a reversal of role. 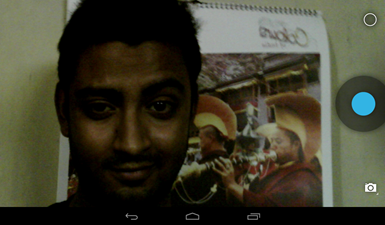 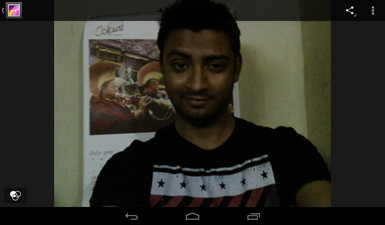 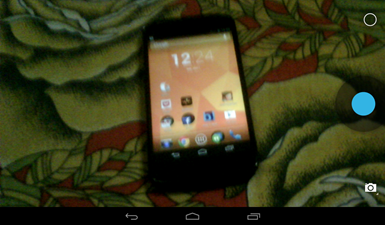 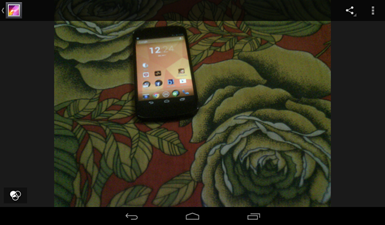 Adding to the list of bundled software issues, the zoom ratio of the camera app’s viewfinder is also badly adjusted and fails to display the view being captured in full.

The rear camera’s performance is exactly what one would expect from a 2MP camera  — best when left unused. But hey, it’s a budget tablet. One cannot ask for anything more at this price point. 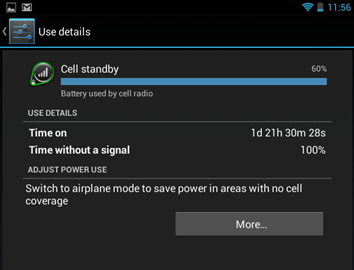 The battery life is perhaps the most important aspect of any device and is hard to overlook. The software, camera quality, etc., no matter how amazing they are, become totally unusable if the device cannot run for more than a few hours.

The 3000mAh* battery that comes with the Lava Xtron+ isn’t anything special, but its battery life is something to talk about. It exceeded my expectations by a fair margin and that too when it’s software is plagued by the Cell standby issue.

The Flipkart listing page reports the battery capacity to be 3,700mAh, which is probably wrong since the official specifications page on Lava’s website reports it to be only 3,000mAh. The battery is non-removable so verifying the claim was not possible for us.

Again, remember that these figures include the battery consumption by Cell standby. The battery life can definitely be further improved if the the issue is fixed. 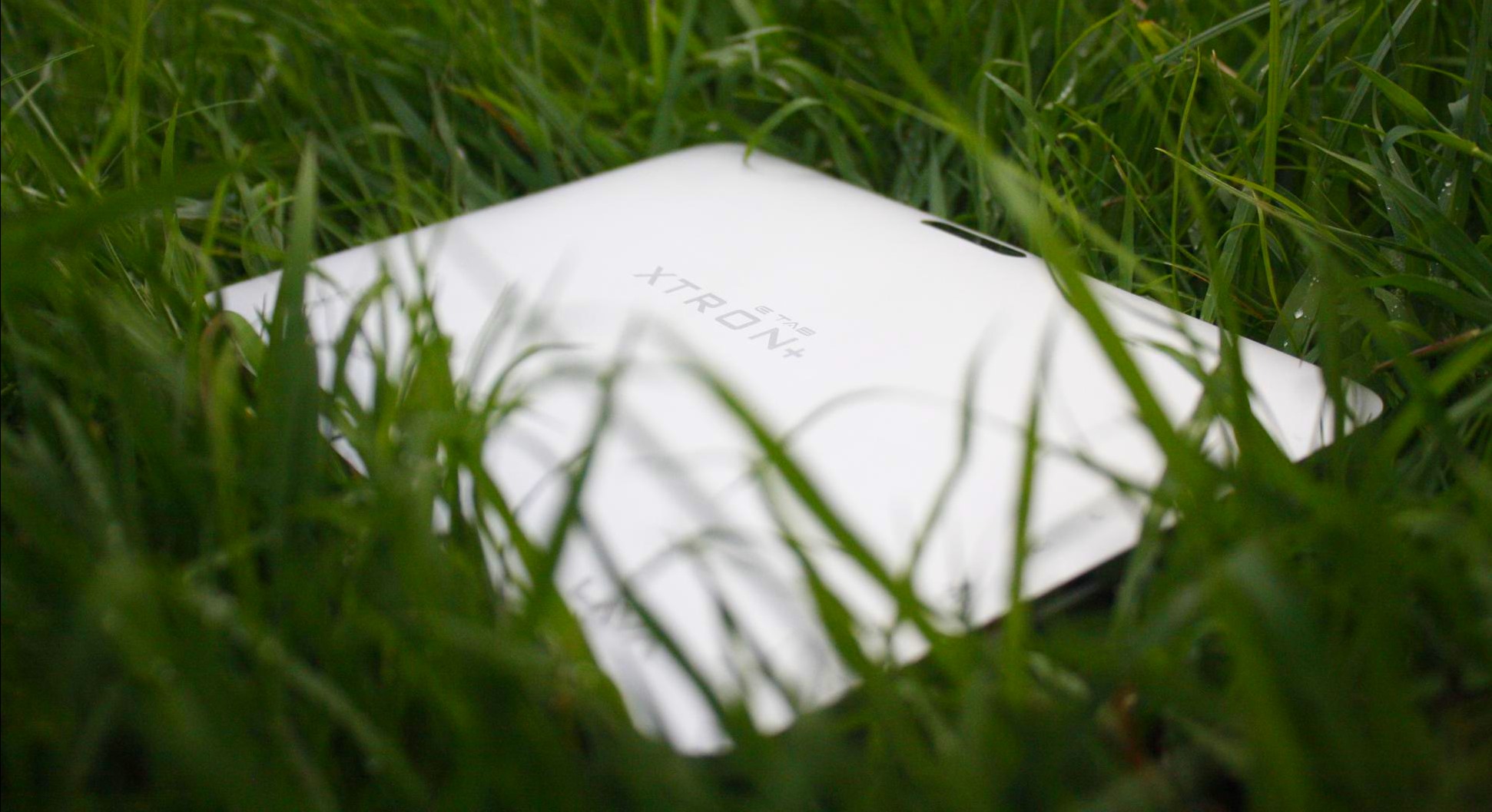 To wrap the impressions in a few words, the Lava Xtron+ perhaps has the best hardware in its price range, including both the internal goodness and the sharp display. But the poorly optimized software and missing functionalities from Android 4.2 demands more attention from Lava and until they’re fixed, rating it anything at above 5 is totally impossible for us.

Should you buy it?

Yes, if you’re looking for a tablet only for casual gaming, web browsing, reading and the battery issue isn’t much of a problem, then you should definitely go for this tablet.

No, if you expect future updates (read: new Android versions) and the lack of Bluetooth and GPS is a problem for you.

hahaha..:)
The most detailed review about any gadget I have ever read..:)
great research and study .Keep it Up..Impressed !!

OS updates and good after sales service is something domestic brands like Lava need to start providing if they want to compete head on with players like Samsung and Sony.

nice post and very good research keep it up

The best review of the tab..well done! Do you know how to fix the mobile standby issue even after airplane mode, due to red colour bad or no signal,battery is going bezerk ..is there a way to completely disable the mobile radio or something else please reply ASAP..

Got it, rooted and renamed phone.apk and telephony.apk and no battery drain..

I bought the same tab. Even after rooting I am unable to rename phone.apk. I tried it using root explorer. Can you please tell me a reliable way to root and rename.

Can you please tell me what software to use for rooting and the link to download.