Just in: Moto 360 Smartwatch- first round shaped Android wear gadget, bought out of curiosity much more than a need. Through this article, I want to share what I felt like after playing with it for last 48 hours. 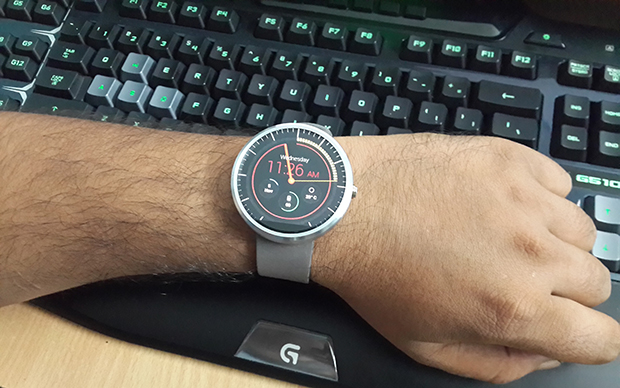 First impression out of the Box

Stainless steel frame tied to leather belt holding a digital display at the center. Wrist Watch, as it should be!

Circular design and elegant display with numerous watch faces gives it an appearance of a real normal watch. So, in the urge of wearing a smartwatch, you are not trading style-statement of wearing an actual old-school watch.

Moto 360 runs on Android Wear which is a platform by Google for Wearable gadgets. On starting up, it asks to install Android Wear on your phone so that it can connect and sync information. 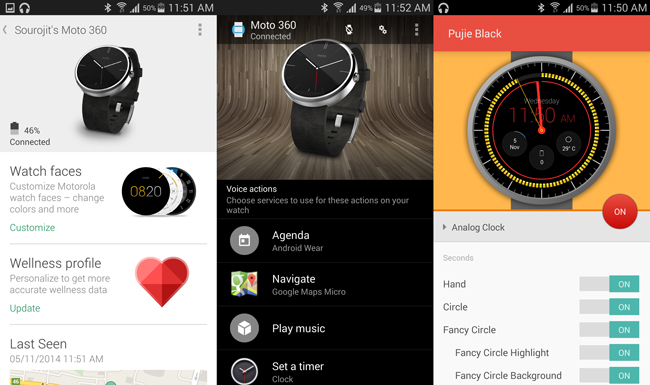 What is its Usability?

Concept is fairly new and hence the question. It is a watch that goes beyond being just a time piece- an information gadget which you can wear on your wrist.

It has an inbuilt Pedometer and Heart Beat meter which keeps track of steps walked and heart rate respectively. Most of the people buy a smart watch for health and fitness purpose only. No, not me.. I am just an enthusiast, an early adopter of technology.

Being connected to your phone, you can opt to get notifications on watch for Facebook, WhatsApp, Hangout Chat, etc. So, you don’t have to open phone or take it out from pocket every time it pings. Makes ignoring unimportant stuff easy while important ones can be replied from there itself.

Not a virtual keyboard (obviously, you cannot type text on that 1.5 inch screen), but you can send a text reply to messages using the voice typing feature.

And did I tell you that it can be voice commanded just like any other Android Smartphone by saying “OK Google”.

Where does it get Power from?

Moto 360 came with a wireless charging dock. I just have to place it on the dock and it starts charging without plugging anything. Cool? 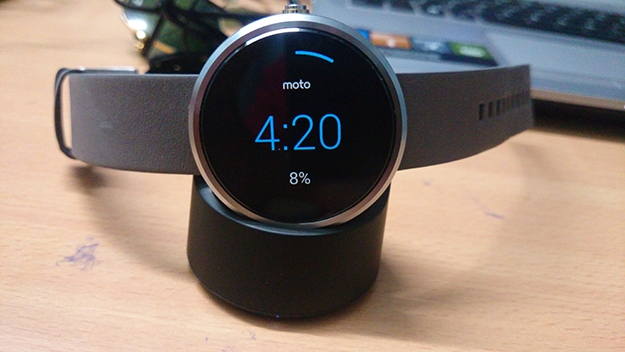 It is powered by 320mAh battery which can run it for a day (as claimed) but in reality it doesn’t. If you keep on poking it,it lasts hardly for 8 hours on heavy usage. So, you have one more device to remember to get charged before leaving.

While it is charging, it is just a watch displaying time and nothing else. Screen stops reacting to your touch and tap. So, it doubles as a bedside clock.

Is it For You?

Overall, I feel that Motorola has given a great thought towards designing. Wearable, in my opinion, should compliment your personality because it will always be on hand and Moto 360 does that. Beautiful, comfortable, lightweight digital timepiece!

It is priced at Rs. 17,999 and comes in two color variants: Black and Silver. Exclusively available on Flipkart in India.

Great review for Moto 360, you provoke me to purchase it.

BTW are you planning to host giveaway for Moto 360 ? 😉

Thanks!
Yes, I will giveaway this watch when I buy Moto 720 😀

Once they improve the battery this product has the potential to be a killer in its segment!

Recent firmware update did improve the battery life so, it lasts for a day provided Ambient Mode is off.

Great and descriptive review. Thanks

You recomment samsung gear 2 or this one?

Hi Nitesh,
I don’t have Gear 2 and didn’t consider it because of square display.
I do have Gear Fit but that looks like a toy in front of Moto 360.

Yes, initially I planned to go for LG G Watch R because of round design. But, when I compared them side by side, there isn’t much difference except for the bevel edge bordering the screen.

Notable difference mentioned in one of the video I watched was PPI density of display. Moto 360 has sharper one.