Many ways have been derived to catch up with TV series, Movies Video streams online; Hulu and BBC iPlayer being the popular one. Either they are not available in your country or they have less choice.

So, Here I share a website which lets you watch popular TV series, Television shows, Movies online via Video streaming. Cuevana is a Argentina based video streaming site with loads of choices covering almost all TV series and Hollywood movies.

Though the main language of site in Spanish but it can be switched to English too. The concept of watching stream videos on Cuevana is similar to ilivid which lets you watch movie while downloading. 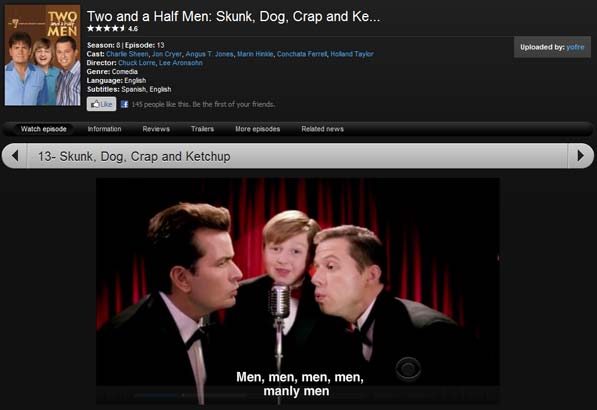 To watch videos on Cuevana, you have to install respective plugin for your browser called “Cuevana Stream”. For any Movie selected, you will be given multiple sources like Megaupload, Hotfile and many more mirrors. Just select anyone > You may have to wait (like you do while downloading) and video will start in seconds.

What more! You can also watch American Live TV shows and many Hollywood Movies.

Note: For streaming, Cuevana plugin has to be installed on your browser.It will differ according to your browser and you will be prompted to do so while streaming a video.

Video streaming speed depends on your Broadband connection. I tested it on 2 MBPS and video stream was absolutely fine.

Cuevana has removed “English” as language option and site interface is only in Spanish but this doesn’t make any difference. As we are interested in watching TV shows, we can always find out them by typing out name in search bar which can be recognized by “Magnifying glass or Search icon”.

Also, the Homepage sports banners of Movies and Sitcoms which are in English itself so, watching experience isn’t really affected.

Alternative Sites to Watch US Sitcoms

Youku and Tudou are two major video sites in Mainland China (they signed agreement to merge to one recently). Site interface is again Chinese but as I said above, you can always search what you want using the search bar on site and then click on the video thumb of specific episode to be played.

In my opinion, Cuevana is far more sophisticated and offer awesome video quality of streaming. Also, the Episodes of any Series are arranged according to Seasons which makes watching easy.

Above solutions are for watching shows online but if you prefer them downloading then Vidmasta can Search and Download TV Series for you.

Note: In case you have problem browsing site in Foreign language, It is recommended to use Google Chrome. It has inbuilt Google Translation ability to present webpages in English on demand or automatically.

My brother recommended I might like this blog. He was entirely right. This post truly made my day. You can not imagine just how much time I had spent for this info! Thanks!

How do I install cuevana in a toshiba tablet?

It is a browser plugin. Which Web browser do you have installed on tablet?

Cuevana is no more in English 🙁
Do you know some more sites like Cuevana ?

Interface Language is not actually a problem when your main concern is watching Videos. I have updated the article with Alternatives though but still not English source.
I would like you to use Google Chrome as browser which lets you to view sites in English by translating webpages automatically.