Why Apple TV is Not Valuable for Indian Customer

The Apple TV is finally in India. The prodigal content based service from the infamous iStore is being launched at a price of INR 7900 in India. The Apple TV was initially developed at Apple purely as a hobby, but the product was too tempting to be just a hobby and was finally released as Apple’s very own Apple TV. While the name seems to suggest a television, Apple TV is nothing in those lines of thought. For the uninitiated it is just a content service not much unlike your DTH set top box, with the difference being that it brings the most high defined contents like movies, music and photo streams straight into your widescreen television alongwith the services of iTunes, iCloud and photostream. 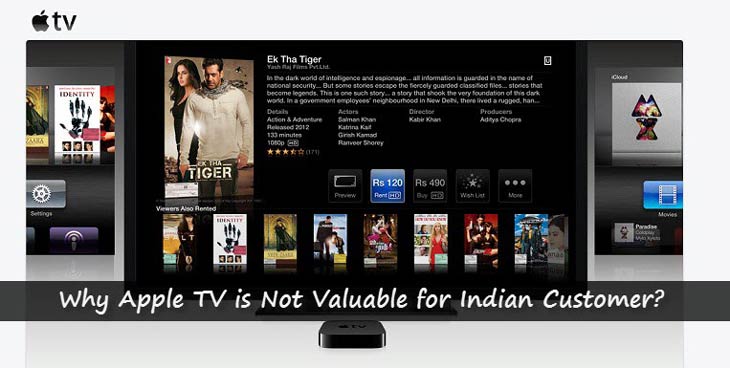 The Apple TV has definitely had a good stint in its already existing markets such as the US market. However with the launch in India, the question stands as to whether the product will see highly scaled sales and popularity like the iPhone or it will just be yet another launch in the content provider market.

The initial reaction at anything Apple is of course one of intrigue and the promise of a great product. But with the Apple TV, the question stands as to whether the popularity of the iPhone would be replicated, in the event of which the Apple TV might well be a competition to the DTH and cable services in India today or else in an alternative traction, the Apple TV might just prove to be of value to the eyes and be nothing more than a showpiece at an iStore near you.

Why? It’s because in India we still do not like to pay for everything we use. However before an elaboration on why the apple TV is not valuable for Indian Customer, let’s look into what the Apple TV actually brings to the table.

What Is On Offer In The Apple TV

The Apple TV definitely brings in one of the most extensive content services around to the drawing table and into your widescreen TV. The packaging of the contents and the utility of Apple’s iTunes, iCloud together is a definite plus that the Apple TV carries. 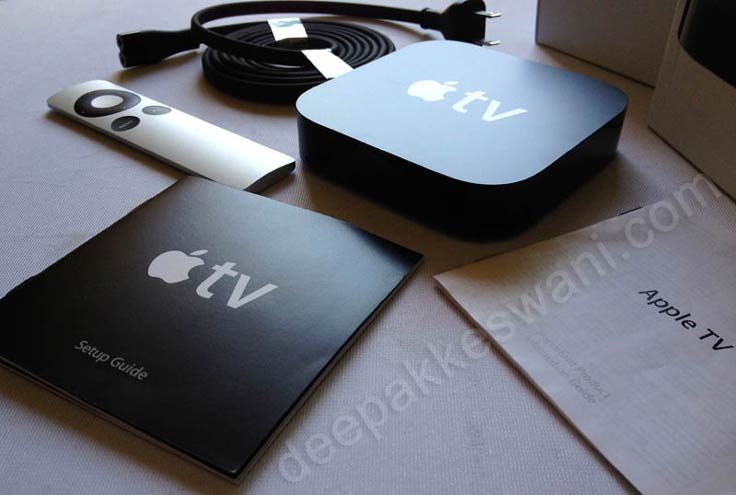 The Apple TV’s extensive content services and utilities include the following:

These and a few other content services that come packed in with the Apple TV surely makes its launch in India one of note. But is it meant for the Indian market to be precise. The Apple TV might be unique and special but it might not find a place in Indian living rooms soon. Why? Reasons galore.

Not Essentially A Valuable Must Have

The reason why the iPhone fares so good in India is because it is seen as a valuable must have in terms of its price value and its worth for value and of course it helps that it is highly exclusive in the market. But the same can hardly be said for the Apple TV. At an odd 8000 INR, the Apple TV has a high value definitely but is it a good worth for the money? I would say no, at least not immediately.

Yes, it does provide oodles of content that would be difficult to get in a single place but then if you would have noticed, every other content leads up to a paid subscription, like with the songs on iTunes or the movie rentals, which as a concept I daresay does not work in the Indian market. One could argue that such contents even on the iPhone are a paid service, but then that is not the only thing we get from an iPhone, unlike which in the Apple TV contents are the main stay.

It’s In India but Is It in India

The Apple TV has been launched in India, but the question stands as to whether it has arrived in India. Sick puns apart, the question is really into whether the Apple TV comes blended with the Indian market? For starters, its price tag of an odd almost 8000 INR is not something an average Indian would be subscribing to, for just a content service hub.

Secondly, while the product is definitely eye catchy and attractive, does it carry the compatibility required to suit utility bandwidths in India. Internet bandwidths are still not that efficient to support such services in India. Furthermore, the Apple TV might be into India but until and unless it is able to feature in the Indian television channel contents into its services, the point of getting it into your living room might not make much of sense.

The Apple TV is definitely a looked up to product launch in India, but it does not look to be a adopted by Indian Customers because it definitely does not seem to be in sync with Indian times of now. And of course there is always the truly Indian fact that we still do not like paying for everything we use.

About The Author: Rupam Gogoi works with FindYogi, which is working on its vision to be the best comparison shopping place in India and building products that support the commerce Eco-system. His major interests are alternate technologies, products and startups which he covers extensively.  A writer, a human resources guy, a startup enthusiast, a wannabe singer and musician.

Nice informative post. I guess it needs more time in India for such proposals to have good business.

What do you think?

Apple is in talks with BSNL / MTNL guys for IP TV integration. if it works out, you may get entire set of channels on Apple TV, just like set top box. By the end of 2013 Apple would have endorsed with major Channel brands to offer better Apple TV experience internationally.
There is also possibility of hooking Apple App store and SIRI to Apple TV.

For Indians, Definition of Television set is to get daily soaps and Reality show entertainment. If the news of collaborating with BSNL IPTV is true, then it would be a great combo.
Even I may give a thought for purchasing one 😉

If the talks with BSNL/MTNL works out or any collaborative effort as such materializes, then yes the Apple TV might be standing with a value proposition for the Indian customer, but otherwise it would be just a product from Apple that made some noise upon its launch and did nothing later. And of course pay on as you go on isn’t exactly seen as a fab fad in the Indian entertainment content subscription market.

There is also possibility of integrating Reliance BigFlix to Apple TV in India like they have NetFlix in USA.

It may not be 100% useful to Indian audience like US/UK, but there are plenty of features you don’t want to miss out with Apple TV.
* Watching YouTube & Vimeo Videos directly with Apple TV remote.
* Watching or listening Podcast / Vodcast
* Listening to Internet Radio Stations. There is option of 50,000 stations to tune in.
* Airplay: There is no alternative to this feature if you have iPhone/iPad or Mac.
* Buy or rent SD / HD movies (Not everyone may like it, but there are already many takers)
* Buy or play music from your Apple iCloud account.

One may have spent 50k for an LED television and 25k on Home Theater speakers. Unfortunately there is no way to connect internet to this powerful infrastructure. Spending Rs. 7900 to integrate everything together is really worth.

What Indians are going to miss is only some American sports content, Netflix & Hulu. I would say you still get 75% or more value out of this box.

Hi Deepak,
Thanks for your inputs but what I feel that these benefits are still not so valuable.
Assuming a person with CRT TV will never buy Apple TV, I want to tell you that-

*Youtube and Vimeo videos can be directly played on Smart TVs starting from 28K. I recently bought Samsung LED Smart TV (for 36K) and it has those features inbuilt.
*Moreover, Samsung App Store lets me download many more apps like FB, Twitter, etc. (which are pretty useless because It will take ages to type status update with remote.
*Smart TVs also include Internet Radio stations. ( I don’t know exactly which ones are included and what different is offered by Apple).
*About Buying and Renting, Indians really don’t like to spend 😛
Those DTH service providers offer a movie for 25-40 Rs. but I haven’t seen anyone taking up that too.
*Airplay is the only one feature that I agree as a valued one. But again, person should own an iDevice already.

Simply, Consumer will compare it with what he already has and what can be brought at minimum price value. So, I think Apple TV would stand nowhere.

Thanks for clarifying about your perspective.
* I agree on that Apple TV is not for the people who still own CRT TV.
This fits perfectly well for the people who have invested in LCD/LED TV few years back and also own Apple Devices. Smart TV option was not there for many in the budget in last few years.

* Apple TV shows all the Radio Stations as listed in iTunes area. Most of these are 128 Kbit high quality.

* Regarding renting or buying movie, I understand Indian approach. You can find plenty of Bollywood movies these days on YouTube with official release. I’ve covered this on recent post on my website.

* In case of Apple TV you can use iPhone & iPad screens for input. In recent version they also started supporting bluetooth keyboard. Looks like they are setting up stage for iOS Apps 🙂

* Whole idea of bringing Apple TV to India is because imports of Apple TV from gray market were increasing, so Apple thought of streamlining the store and TV first in Indian market. I am sure by the christmas 2013, Apple is going to announce something really big on the lines of Apple TV.

thanx dude for giving me all about information , i love your websie too much