Rich Notifications in Chrome is the Best Feature Ever! Here are 11 Extensions that Support it 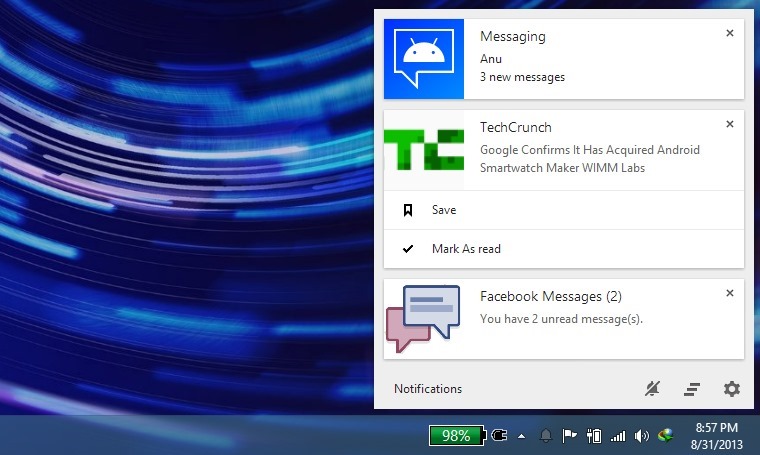 The recently added ‘rich’ Notifications functionality in Google Chrome is perhaps the best feature of any browser ever! For those unknown, Google has introduced a new way for apps and extensions to display desktop notifications in a streamlined fashion — even when the browser is not running with options to dismiss it or perform extra actions.

This new rich notification in Chrome system shares striking similarities with Android’s notification system. Notifications are presented in almost the same manner with two quick actions along with clear, mute and preferences buttons.

With this functionality still in its infancy, the number of Chrome extensions that have added support for notifications is a bit low. And with the gigantic Chrome store containing several thousand extensions and apps, it’s totally difficult to find them.

Thankfully, we at Blogsolute had been working hard, sweating our pants under the strong sun to handpick the best extensions for you:

The internet is incomplete without Facebook and so is the Chrome store, where Facebook has the maximum number of third-party extensions. Fruumo brings notifications from Facebook directly to your desktop even when Facebook is not opened. Fruumo currently only supports Facebook, but plans to bring in more services soon according to the developer.

2. Checker Plus for Gmail 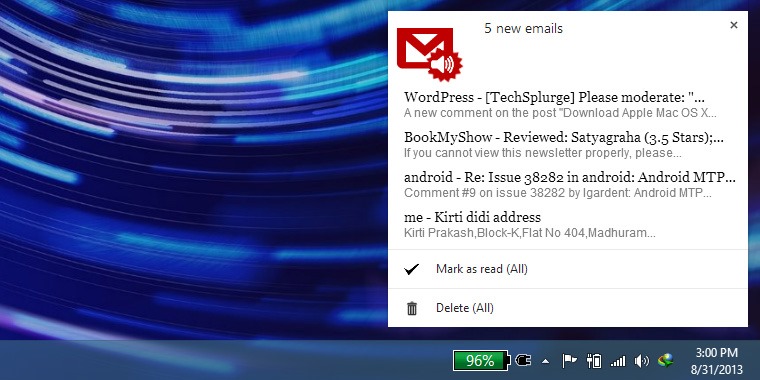 As you must have already guessed, Checker Plus is an extension that notifies you about incoming emails from your Gmail accounts with options to mark as read, archive, delete, reply, star and mark as spam directly from the notification. And it even reads aloud the email summary if you’re away from your computer.

Apart from being a fully fledged Twitter client as an extension for Chrome, Notifier for Twitter displays notifications whenever you’ve new tweets, mentions or direct messages.

With offline support, location and time based reminders and even an Android app, Google Keep is the best note keeping app ever. Period. Quickly save, access and organize the information you want with Google Keep. Create a text note, add a photo, or type up a quick list.

Feedly, a pretty old RSS service, shot into limelight after Google Reader’s shutdown was announced. It has an incredibly designed web interface and app for Android. If you’re looking for a RSS reader service, I’d strongly recommend Feedly. This extension shows new and unread items in your Feedly along with quick options to save an article for later or mark as read.

This app allows you to receive Android notifications in your browser. In order to use this app you also need to download and install an app for your Android phone or tablet.

After installing the app on the phone, it randomly generates a code. Enter the code in the settings of this Chrome extension to start receiving notifications.

For those who’re active users at DeviantArt, this extension is for you. dA message notifier will track your message counts for you and notify you when new messages appear in your deviantART Message Center.

Reddit companion is a Reddit extension for Chrome that adds a toolbar to Reddit links with options to quickly vote, save and view comments on posts. Along with this, it also displays notifications for new messages (orangereds) as they happen.

With twitchtv notifier, you can follow your favorite streams and games without having to follow them on twitch.tv. This extension will notify you whenever your favorites go live.

This list ends here. Unfortunately, there aren’t many extensions for Chrome who’ve added support for this excellent new functionality. If you think that we missed any extension, do let us know by dropping in a comment.

Great collection of google chrome extensions Just now i added android desktop notifications, It gives all the details of my android mobile. previously I used only some extensions for chrome, Bust these are awesome extensions. Thanks for sharing …..

Great list of Chrome extensions! I will be using this immediately. 🙂