How is Windows 8: Computing Experience Redefined | On Hands Preview

Windows 8 developer build was unveiled recently at BUILD Conference officially by Microsoft and now available for download. Attendees got a chance to have hands-on Windows 8 Tablet. So, here are first impressions of Windows 8 as Operating system.

Windows 8 is dual faced, first one called Metro built for Tablets and other for Desktop. Tap the tile called Desktop, and a Windows desktop which looks a lot like Windows 7 appears. This is where the dual personality comes in.

From the moment we turn on a tablet with Windows 8 we realize what is new in Microsoft system: Homescreen. Just unlock the system and have a quick view of the new notifications: mail notifications, calls, messages and calendar events. 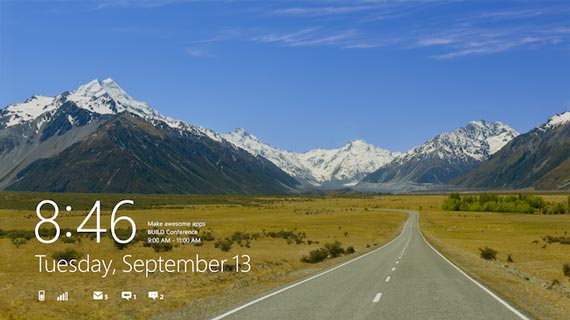 Though we already went through all Windows 8 Feature list revealed officially. Microsoft wanted applications to be centric in Windows 8. Instead of letting each developer to make the application as he pleases, Microsoft offers a similar experience between applications.

The first is that all applications are Metro Full Screen. No taskbar, no menu bar. Everything is the application, no commands, only content.

From any application, you can access a shortcut menu by sliding your finger from the right edge inward. There are several options: Search, Sharing, Home, Devices, and Settings. In Settings you can quickly change some system settings (volume, brightness, notifications, Internet …).

Fortunately, Microsoft has learned from Windows Phone 7 and the Picture Management is much better than in the mobile. We can organize them into groups, and pick the size (small or large) to give more or less importance. Nor do we have to worry if we have a very large list of tables. Instead of horizontally sliding for a while, we’ll just zoom out with two fingers, move a bit and return to normal size. 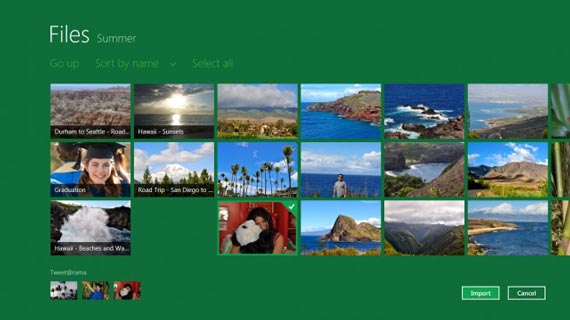 Microsoft is also committed to some changes in what refers to touch gestures. In Windows 8, the long tap on an item is replaced with a “swipe down”: slide your finger down on an item. On the home screen, for example, a swipe down on a table would show the options menu of the picture.

Along with this, Windows 8 Explorer is also revamped with Aero and Ribbon Interface, tweaked for more productivity.

In mobile tablet and we got used to the single-tasking, only one task on the screen at the same time. In Windows 8 this is not true: you can drag an application from the left edge to the side. Thus, we have two applications on the screen, The main occupying two thirds of the screen, and a secondary occupying the other third. A great idea if you want to Twitter while reading RSS or the calendar while you are on the mail to give two examples. 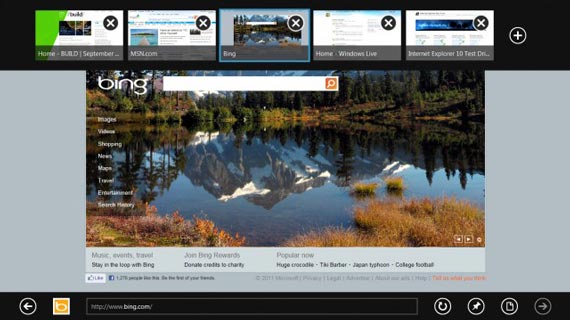 Applications are no longer alone, they are all interconnected

Microsoft changes the concept of operating system in the sense that it’s not just the computer that allows applications to function. Now, applications are connected to each other and with the system. 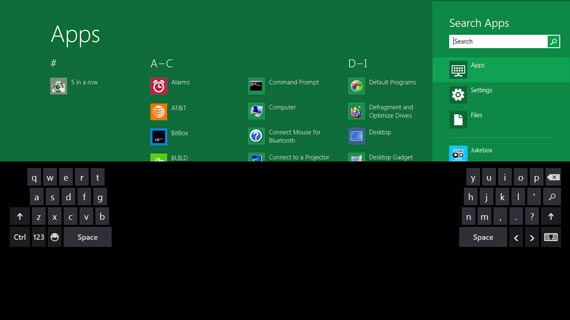 A clear example is the possibility of share anything from any application. In the shortcut menu have the Share button. Pressing can send the content we’re looking for any other application. For example, we send a photo via Twitter, or email article to a friend, very similar to what makes Android. In addition, we have the common stock on hand which facilitates the task.

The search also happens to be a connection of all applications and not just something that the system offers. We have the traditional search of files, applications and settings, yes. In addition, we can look into the applications. Through the search button shortcut menu, you can click on the application that interest us, and find content there. For example, searching on Twitter or Facebook from the normal search interface by simply choosing that application from the menu.

The file system is very similar. In addition to traditional Windows, you can access the files provided by applications. We can access, for example, photos on Flickr or we Skydrive like a directory without having to do anything special.

Keyboard, mouse, stylus, finger: Windows 8 is ready for everything

Microsoft has taken into account all possible input methods on Windows 8. Your new system works great with anything that comes to mind: keyboard, mouse, stylus or finger. 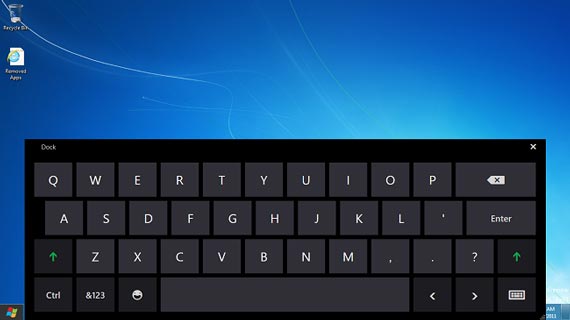 The Touchpad is very well managed. It has automatic spell checking and word suggestions. We can also use it as a normal keyboard or both thumbs on the keyboard mode separately.

Of course, we can also use the keyboard and mouse as normal. The only difference with respect to use your finger to see is that the bar of the application or previous application will have to click on the border instead of sliding, and the shortcut menu appears in the lower left corner by pressing the Windows keyboard.

And if we are to use pencils to the screen, we can do. Most of the time it is as if we used the finger, except handwriting recognition. It works really well, and changing the way we can use the keyboard. Very convenient if you have a stylus.

All Windows 8 Devices will sync in Cloud

Microsoft also wants to have same experience on any device. Our user accounts associated with Live IDs, and our user accounts, including our photo, backgrounds and settings will be synchronized via Internet.

Our mail and calendar are also connected in the cloud, either with Windows Live, Exchange or Google (not sure it is, but there is no reason to think that not included). You can also synchronize your contacts in Windows Live, Facebook, Twitter and LinkedIn, and chat with them regardless of the service they use.

Bottomline – They have really re-invented Windows

From all above What all I understand is Microsoft has taken seriously the user experience, have thought about what is the easiest way to use the computer and have implemented it very well.

Metro have ventured to have done something totally different from what he had and they have gone great. Have unified system experience, homogenizing and interface applications. And all this without forgetting the traditional Windows, applications might not work in Metro. They have combined really well and I must say that I am very surprised.

Thank you for the info brother. Keep on doing the goog work.

Thanks a ton of lots amazing Article ,,,….

Brilliant article. I am currently testing Windows 8 and the most frustrating thing i found was looking for the start button!! Theres lots of new features in Windows 8 and i think overall it improves on Windows 7!

how to test windows 8. give the link
currently on win 7.